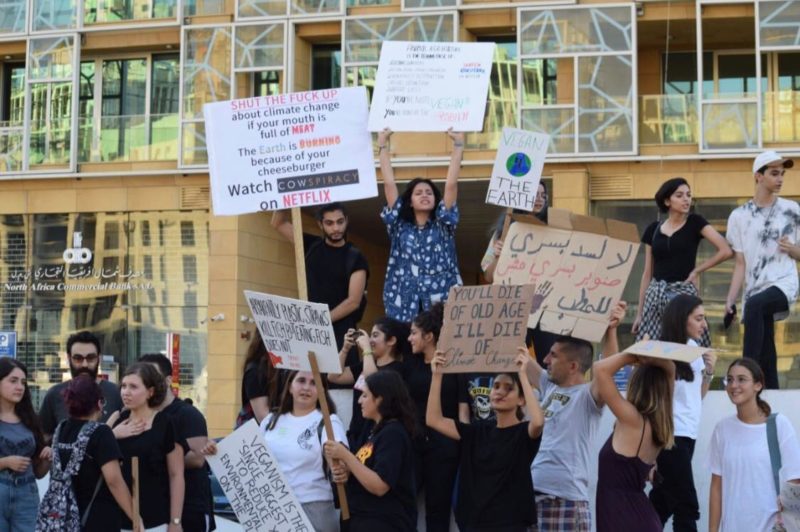 Hundreds of Vegans and protesters came together on Friday the 27th of September 2019 to march in Beirut holding signs and demanding urgent action on climate change, joining a worldwide strike inspired by 16-year-old Swedish activist Greta Thunberg.

The Demonstration has started at 3:30 PM from AUB Beach and ended at 6:00 PM at Martys’ square in Beirut Centre Ville. The protests highlighted the leadership role of young people in the international cry to demand urgent measures to stop environmental catastrophe.

With world leaders gathered in New York for a UN Climate Action Summit on 23 September, the climate strikes were started by brave, passionate young activists around the globe who took off from school or work to raise awareness of the climate crisis and encourage governments to take action to tackle it. While this is a worthwhile endeavor, there’s no need to wait for a special date to commit to saving the planet, the global warming caused by heat-trapping greenhouse gases has already led to droughts and heat waves, melting glaciers, rising sea levels and floods, according to scientists.

While it was inspiring seeing so many students and adults taking the streets speaking out for mother earth. How empowering it is for them to come out in droves to rail against the fossil fuel industry, it was heartbreaking seeing the vast majority of them are completely disconnected from the fact that they are a huge part of the problem.

Animal agriculture is the leading cause of climate change. It is in every single sector. It is destroying the Amazon. It is causing famine, mass migration, and species extinction. The UN has stated that a global shift towards a plant-based diet is essential to combat the worst effects of climate change, and research from the University of Oxford has found that going vegan is “the single biggest way” to reduce our environmental impact.”

In August, the U.N.’s scientific panel on climate change released a report warning that unless humans change how they produce food and use land it will be impossible to keep global temperatures at a safe level.

Carbon emissions climbed to a record high last year, despite a warning from the UN-backed Intergovernmental Panel on Climate Change in October that output of the gases must be slashed over the next 12 years to stabilize the climate.

Here are a video and pictures of Vegan Activists marching along with the protesters from AUB Beach to Martys’ square in Beirut Centre Ville.

Each year, humans kill more than 60 billion land animals for food – that’s almost seven million every hour.
All these animals produce massive amounts of waste, which releases powerful greenhouse gases into our atmosphere. Animal agriculture is the single largest source of both methane and nitrous oxide; greenhouses gases that are 25 and 300 times more potent at trapping heat than carbon dioxide, respectively.

As individuals, we can make a big difference with our choices. It is not enough to sit around and wait for other people – politicians and corporations – to act to save our planet.

A person who follows a vegan lifestyle produces the equivalent of 50 per cent less carbon dioxide than a meat eater and uses 1/11th of the oil, 1/13th of the water, and 1/18th of the land.

So by all means, take part in the strike for the climate – but remember, if you want to see a change in the world, be the change!