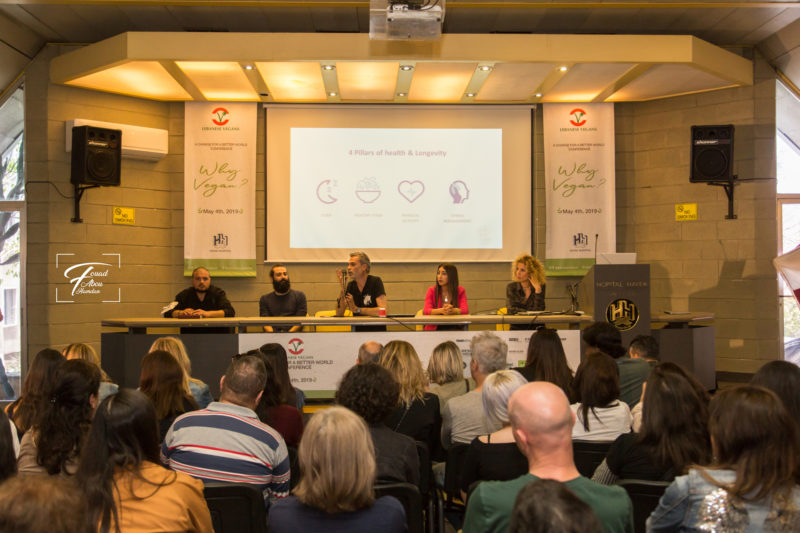 Hundreds of enthusiastic guests attended the Lebanese Vegans first-of-a-kind conference “A change for a Better World” on Saturday, 4th of May 2019 at Hayek Hospital – sin el fil in the presence of some Lebanese media such as Future TV, NBN, AN-NAHAR.
“Why Vegan” was the event’s trending hashtag and inspiring slogan which carried an encouraging objective to inspire people to put their compassion into action for animals, the environment and humanity.

The conference started with a heartfelt speech by Georges Hayek, founder of “Lebanese Vegans” and owner of Hayek Hospital.
Hayek described how he became vegan after he began noticing the sentient soul in his pet dogs’ eyes, which exists in every animal that gets turned into a burger, and realized the irrationality of cuddling and protecting one animal while confidently eating the other.

Hayek also posed a stimulating question to the attentive audience, “How can people sign petitions to stop eating dogs in china and be fine with eating other animals themselves? There is no difference between a dog and a cow, chicken, or fish. All will fight for their lives when being slaughtered.”

Additionally, Hayek highlighted on recent studies that found how all chronic diseases are linked to animal products. He discussed how the World Health Organization classifies processed meat as a Group A carcinogenic, like tobacco.

Georges Achkar Salame, one of the organizers at Anonymous for the Voiceless talked about the importance of street activism to spread awareness about animal abuse and suffering in farms and slaughterhouses. “we hold an abolitionist stance against animal exploitation and promote a clear vegan message” Salame explained.

Anonymous for the Voiceless has been organizing multiple “Cube of Truth” in all areas of Lebanon. The volunteers who constitute the Cube team wear “Guy Fawkes” masks and dress in black while standing tall and still in a cube formation. They hold signs and video footage revealing what slaughtered animals experience on a momentary basis. If a member of the public is interested in what they are showing, they have a conversation with them. Salame also added “We do not push anybody to approach us or approach anybody before they come to us. We believe that the first step in accepting the truth is to move towards it with an open mind”

Roland Azar is an Animal Liberation Activist, Contributor at the “Lebanese Vegans” awareness campaigns and founder of the active and influencing online awareness platform “Choose Compassion“.
Azar methodically discussed the value system in society and how the belief that humans are superior to animals and that animals are here to serve us, damages humans, animals, and at a large scale, the environment.
Roland Azar delivered a detailed presentation about the negative environmental impact of Animal Agriculture and how a Vegan diet can reduce our carbon footprint, help restore deforested lands and saves energy, fresh water and grains for human consumption.

At the food market, heaps of attendees excitedly refreshed their palates tasting the varied products of multiple local vegan restaurants, bakeries, and brands while networking and enjoying Live music featuring Nathalie and Roland from the Rock band BandAge.

The attendees had the chance to experience a live demonstration of the Cube of Truth.

People turning to plant based diets is now becoming a global positive change.
More and more consumers are beginning to understand the biggest choice they make which will automatically help humanity, nature and of course our beloved animals.

Lebanese Vegans participated in THE INTERNATIONAL PEDIATRIC…
June 21, 2019 No Comment

Lebanon Is Finally Opening Up To Veganism!
November 1, 2017 2 Comments