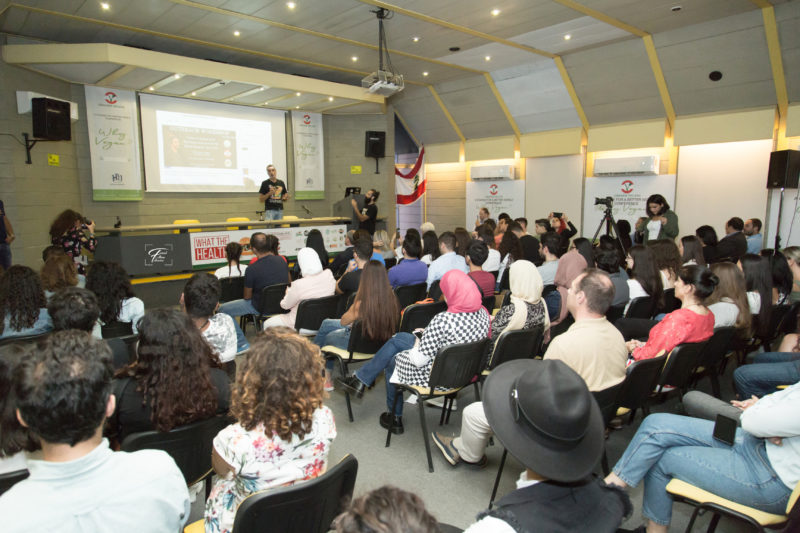 What the Health is the groundbreaking follow-up film from the creators of the award-winning documentary Cowspiracy. The film exposes the collusion and corruption in government and big business that is costing us trillions of healthcare dollars, and keeping us sick.

This event has been organized by active members of Lebanese Vegans featuring Sebastian Henrich (Ahtlete & personal Trainer from Germany) who has been invited to Join the event and share his own experience on how to be healthy and build muscle on a vegan diet, and Patricia Khoueiry (Animal Rights Activist and volunteer at Anonymous For The Voiceless).

The event started with a welcoming speech by Georges Hayek, founder of “Lebanese Vegans” and owner of Hayek Hospital.
Hayek marked out this year as an interesting one for the vegan movement in Lebanon describing all the successful previous activities and events organized by Lebanese Vegans since May 2019 and highlighting on the ethical aspect of veganism which is against any form of injustice towards animals or non-animals.
Hayek explained that the main stream media is not the only media that we have today and the truth is now exposed, pointing out that the meat, dairy and egg industries always rely on secrecy and lies in their Ads.
Hayek also added: “It is really sad to live in a society where the truth is offensive and lies are accepted”.

Hayek believes that the majority of meat eaters are non-violent persons and against violence, so it is a matter of time for those genuine people who wasn’t exposed to the truth to take a moral stand towards what they witness from unnecessary suffering and the agony of these animals. Additionally, Hayek highlighted on recent studies that found how all chronic diseases are linked to animal products.

Rachelle Kayrouz (Lebanese Vegans coordinator & animal rights activist) presented the Lebanese Vegans blog lebanesevegans.net/blog/ which aims at helping non-vegans transition to veganism by giving them articles about ethics, environment, health and many nutritional facts. Rachelle also added: “Our aim is also providing an expressive platform for all Vegans who would like to share and talk about any topic or article”.

Rachelle also demonstrated some of the already published article on Lebanese vegans website and encouraged the attendees to subscribe to the Newsletter.

“What the Health” Film Screening

“What The Health” film follows intrepid filmmaker Kip Andersen as he uncovers the secret to preventing and even reversing chronic diseases – and investigates why the nation’s leading health organizations don’t want us to know about it. With heart disease and cancer the leading causes of death in America, and diabetes at an all-time high, the film reveals possibly the largest health cover-up of our time.

Sebastian Henrich introduced himself as an example that it is possible to do the change and build muscle on a vegan diet. Henrich ditched animal products at first place for ethical reasons and then, for his health and the environment. He talked briefly about the three aspects of Veganism (Ethics, environment and health) and discussed in details the myths, deficits and nutritional facts about Protein, Iron, Vitamin B12, Calcium, Soy and Carbs.

Sebastian then said that obtaining “recycled” nutrients from animal products comes along with extra chronic diseases. Finally, Sebastian highlighted on the benefits he experienced after adopting a vegan diet and provided some suggestions to follow.

Patricia Khoueiry, a Vegan Activist, took the stage and gave a heartfelt speech about the ethical aspect of Veganism.

“Patricia defined Ethics as ” knowing the difference between what you have a right to do and what is right for you to do, then we can all agree that killing someone who doesn’t want to die is wrong ethically and morally”
Patricia then explained that farmed animals have the ability to suffer and show emotions just like our companion animals and us.

Patricia also posed stimulating questions “Why should we take advantage of such sentient beings? what makes us more important or superior to them? Why should we use those beings for food clothing entertainment or experiments? If we truly are the smarter, the stronger and the dominant, shouldn’t we protect the weaker rather than use and abuse them? Now put yourself in the victims position, how would you feel if you were born already with a death sentence?
Additionally, Patricia described how these sentient animals are forced to live short miserable lives filled with anguish and despair solely to make profit for the greedy humans.
Finally Patricia Khoueiry questioned animal lovers ” if you consider yourself an animal lover, you should re-align your morals because you cannot love someone and pay for them to be violently or humanely murdered” ending her heartfelt speech with a statement “Be kind, be compassionate, be vegan”.