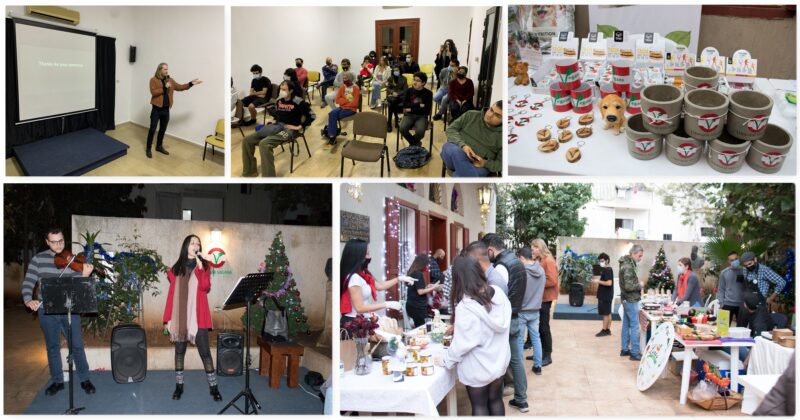 “The Compassionate Christmas” was the event’s inspiring slogan which carried an encouraging objective to inspire people to put their compassion into action for animals, the environment and humanity.

The new vegan support center opened its doors at 3:00 P.M. for enthusiastic people to explore the Christmas Vegan Market.

The event started at 5:00 P.M. with a welcoming speech by one of the active members at Lebanese Vegans Roland Azar, followed by the movie screening of Okja, Sebastian Henrich speech, Q&A, Vegan Tasting and Live Music.

Roland Azar is an Animal rights activist and and has been volunteering with Lebanese Vegans since 2017.
On behalf of Georges Hayek, Rami Merza, Sebastian Henrich and Seb Alex, Azar welcomed the attendees to Lebanese Vegans Social Hub and explained “As a community, we saw a need for a space that supports local vegan businesses, animal rights activists, and like-minded people who are interested in learning more about the vegan lifestyle, a way of living that attempts to exclude all forms of exploitation to animals that share the planet with us”

Okja is a heartwarming tale of a girl and her giant mutant pig caught in the crossfire between animal activism and corporate greed.

Lecture presented by Sebastian Henrich followed by a Q&A session.

Sebastian presented a lecture entitled “The absurdity between loving an individual animal and financing a holocaust at the same time”. Henrich highlighted on the role of News media & ads industry who is expert in triggering and urging people to react and outrage on the abuse or death of an individual animal while on the other hand, to perceive the abuse and death of millions as a statistic, giving several examples on this matter.
Sebastian talked about moral hypocrisy and was asked pertinent questions by the public.

There are always plenty of cruelty-free alternatives to buy in Lebanon that do not support a cruel industry (Food, clothes, shoes and cosmetics.) Check this Lebanese online directory for Vegan products (brands, food, restaurants, shops and others)
veganlebanon.com

Christmas, The Season of Goodwill to People…
December 17, 2018 No Comment