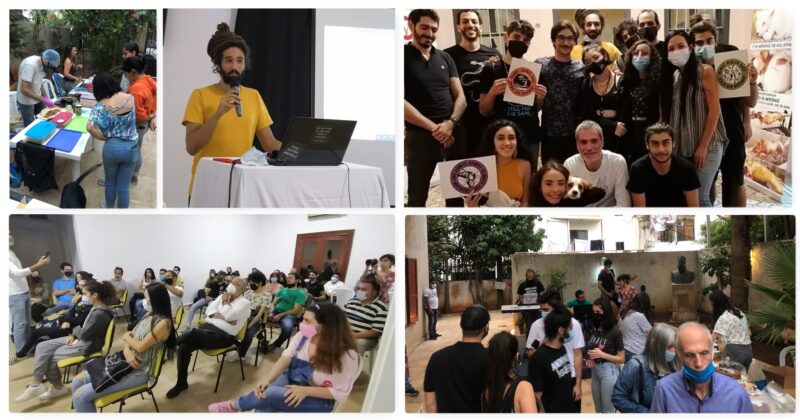 Lebanese Vegans celebrated the soft opening of its first-of-a-kind Social Hub in Lebanon and in the region on World Vegan Day, 1st of November 2020.

Lebanese Vegans Social Hub is all about building a nurturing community filled with vegan(minded) people to gather, meet and enjoy delicious Vegan food and drinks in its beautiful vegan café with a co working area and a small library in addition to a new auditorium where activists will be able to screen documentaries and have some lectures and workshops.

The event started with a welcoming speech by Georges Hayek, founder of Lebanese Vegans. Hayek talked about the goal and mission of the new social hub, explaining that the whole purpose is spreading awareness about animal rights and educating people about a different way of living that minimizes as much as possible in a non-vegan world the damages that each one of us can inflict on daily basis. Finally, Hayek stated: “We’re going to be talking about the ethics and tackling the health aspect of a plant-based diet and exposing the negative impact of animal agriculture on the environment.”

The new Netflix documentary “My Octopus Teacher” tells the moving story of how Craig Foster came to know an octopus – and the emotional bond that formed when he did. After years of swimming every day in the freezing ocean at the tip of Africa, Craig Foster meets an unlikely teacher a young octopus who displays remarkable curiosity. Visiting her den and tracking her movements for months on end he eventually wins the animal’s trust and they develop a never before seen bond between human and wild animal.

Seb Alex is a prominent campaigner for animal liberation, inspiring people to challenge their stance towards animals rights and involve all animals in their circle of moral consideration.
Seb presented a lecture titled “Veganism as a moral obligation” uncovering the large number of animals slaughtered worldwide and in Lebanon solely for the sake of taste pleasure, explaining how this is affecting our health and environment and highlighting on chicken farming in Lebanon that is considered to have a fast return on investment and is supported by government subsidies.
Seb also posed a stimulating question to the attentive audience “On what other issues involving suffering of sentient beings do we allow or tolerate the excuses that are given when we talk about animal rights? Can you imagine using the same logic some non vegans use while justifying their behavior, in other contexts? Such as racism, sexism, or other horrible issues?”

We’re taking Veganism in Lebanon 🇱🇧 to a completely new level! The Lebanese Vegans Social Hub is now a reality! We…

Finally, The center will be a social hub and a vegan support center. Throughout the next year, Lebanese Vegans will continue distributing free food, have free documentary nights, free lectures and workshops and run campaigns to raise awareness about animal rights.