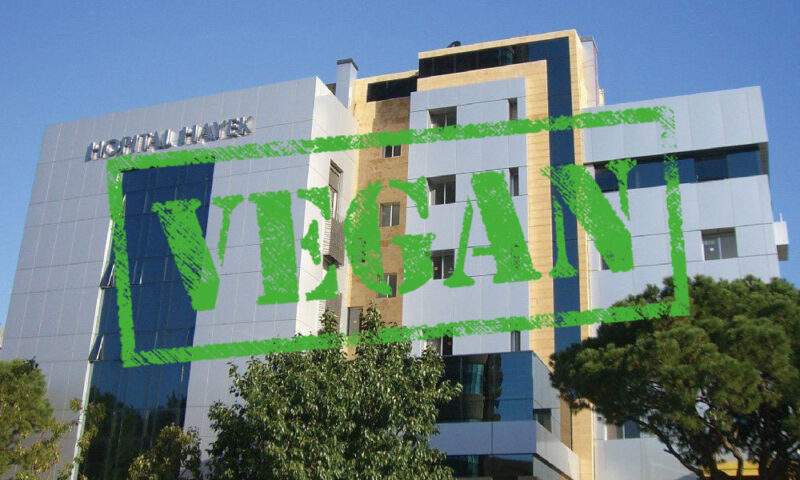 THE VERY FIRST HOSPITAL IN THE WORLD TO OFFER EXCLUSIVELY VEGAN FOOD.

Hayek Hospital located in Beirut, Lebanon made a major announcement on March 1, 2021 on its social media platforms stating:

“Starting today, March 1, 2021, our patients will no longer wake up from surgery to be greeted with ham, cheese, milk and eggs… the very food that may have contributed to their health problems in the first place.
Just last year, our patients were given the choice to choose between an animal-based meal and a vegan meal.
During this transition phase, our patients were provided with information on the benefits of an exclusive plant-based whole food diet versus the dangers of animal-based food consumption. We believe it’s well about time to tackle the root cause of diseases and pandemics not just symptoms. For our health. For our planet. For our fellow earthlings.“

There’s An Elephant in the Room That No One Wants To See.

When the CDC (Centers for Disease Control and Prevention) declare that 3 out of 4 new or emerging infectious diseases come from animals.

When adopting a plant based exclusive diet has been scientifically proven not only to stop the evolution of certain diseases but it can also reverse them.

We then, have the moral responsibility to act upon and align our beliefs with our actions. Taking the courage to look at the elephant in the eye said Georges Hayek, the owner of Hayek Hospital and founder of the nonprofit organization Lebanese Vegans.

The Hospital started earlier offering a full vegan menu at its cafeteria, giving local Lebanese businesses the chance to offer their products and sell their delicious fresh meals that are being prepared at the cafeteria’s kitchen.

Georges Hayek has been offering the hospital’s auditorium and terrace for Lebanese Vegans events, speeches and Documentary screenings and tasting of local Vegan products before establishing the Lebanese Vegans Social Hub, the first vegan support center in the Middle East.

Lebanon has a rich, utterly delicious cuisine that has a worldwide reputation and its traditional Mediterranean food, very often times, happens to be vegan by default.

Hayek Hospital, the very first Vegan Hospital in the world, should be the blueprint for many other hospitals to follow, putting aside a rigid, outdated approach to feed patients dead, rotten flesh (meat) and animal secretions (milk and eggs) for which animals were tortured and murdered and which even propels the deadly diseases for which many patients were hospitalized in the first place.

Hundreds of Enthusiastic Guests Attended the First…
May 7, 2019 No Comment