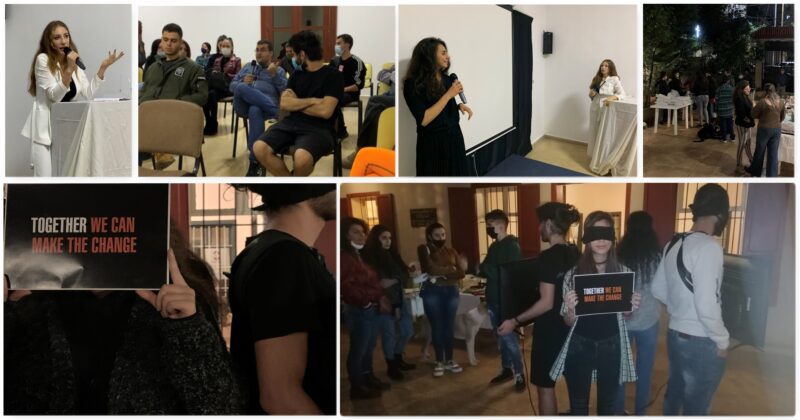 As part of Animal Save Movement’s #WakeUpWorld campaign, Activists at Beirut Animal Save organized an event entitled “Aren’t We All Earthling” and held their very first SAVE SQUARE at Lebanese Vegans Social Hub, Beirut Lebanon on 12th of December 2020.

The event started with a welcoming word by one of the organizers Ilige Mfarej, followed by a documentary screening EARTHLINGS.

Isra Mokdad, is an Animal rights activist and one of the organizers of Animal Save Movement events.
Isra talked about the invisible state of hypocricy. The myth and the concern about protein deficiency in Vegans. The feminist–vegan connection. The massive industries that are full of dark secrets: blood, money and damage. The negative environmental impact of animal agriculture and how the consumption of animal products affects our health.
Isra also posed stimulating questions to the attentive audience such as “Did your food die screaming? Are not animals literally bought and sold? If you have taken an animal as your property and taken their very liberty and life as your own to create products out of their carcass, how is that not a form of slavery?”

There was a great mix of lecture and interactive talks followed by a Q&A session.

Beirut Animal Save held as well their very first SAVE SQUARE at their event. Activists held screens or signs (the signs may say things like “come to see why were here” or “find out how you can help animals today”) while wearing blind folds. Outreachers engaged with interested persons using the Socratic method, which is a line of questions that help non-vegans reach their own vegan conclusion at the end. They also handed out small cards after successful conversations with people to help them do their own investigation about veganism.

The Save Movement is based on Leo Tolstoy’s philosophy

“When the suffering of another creature causes you to feel pain, do not submit to the initial desire to flee from the suffering one, but on the contrary, come closer, as close as you can, and try to help.”

To learn more about Animal Save Movement, please visit www.thesavemovement.org