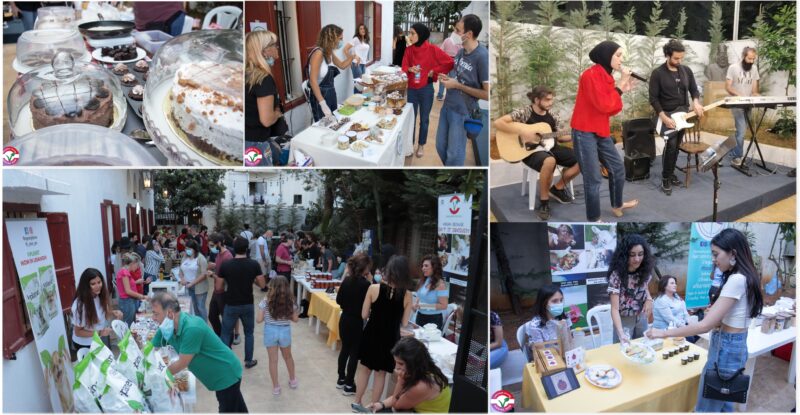 The long-awaited events hosted by Lebanese Vegans are finally back on the calendar after a temporary shutdown due to the COVID-19 Pandemic.

The event started with a welcoming speech by Georges Hayek, founder of “Lebanese Vegans” and owner of Hayek Hospital, the first vegan hospital in the world that serves only plant-based food to its patients and in its cafeteria.

Hayek welcomed the attendees explaining that the purpose of the Vegan café in the hub is for people to gather, meet and enjoy free delicious Vegan food. Hayek also talked about the vegan boutique “We are regrouping all local vegan businesses in one place so you can have a one stop vegan shop in Lebanon and we are making sure to provide everyone with decent quality products as well as competitive prices”

Hayek then introduced Patrick Aramouni, the special guest speaker to the attendees. “Patrick is the living proof that you can be extremely healthy and get muscles. You can be an athlete and compete at high level of performance while being on a plant-based diet” said Hayek.
Hayek also highlighted on the fact that Veganism has nothing to do with being healthy or the positive impact on the environment. Veganism is solely for the ethical part of it. The animals.

“From the Ground Up” the Vegan athlete Documentary Screening

“From the Ground Up” approaches the issue from ethical, ecological and health aspects. Experts weigh in, and football and soccer players, a weight lifter, a climber and ultramarathon runner Scott Jurek offer stories of why they became vegan and how it has helped their performance.

Patrick is a 33 year old athlete and health coach, born and raised in Lebanon, and currently residing in Montreal, who has been documenting his journey into veganism on social media since 2017 and reaching a combined audience of around 220,000 people on Tiktok and Instagram. Patrick enjoys sharing workout tips & tricks, nutrition information, as well as workout videos.

Patrick presented his lecture titled “My journey: How I went from sales professional to vegan content creator”. Through it, he discussed his background story and his long gone habit of consuming meat and dairy three times a day, a habit he developed after being convinced that in order to build muscle, one has to eat meat – a myth that is perpetuated by the meat and dairy industries which profit from the sales of protein powders and meat products.

Aramouny went on to narrate how during his childhood, he was deeply moved by stray dogs on the streets and the heartbreaking conditions they were enduring, and how his empathy for the dogs led him to build shelters for them. These memories would come back to him many years later and make him question his life choices. After all, how could he be an animal lover who takes care of dogs, while also eating cows and chickens? At first, it seemed like a moral dilemma with only two choices: “It was a choice between being a fit guy who ate meat and was a hypocrite, or being a skinny animal lover.”

Patrick‘s habit continued until a nonvegan friend recommended him to watch Gary Yourofsky‘s influential video titled “The Most Important Speech You Will Ever Hear”, a video which uncovered the brutal truths of the animal agriculture industries. With new insight and perspective, Patrick asked himself: “This is what’s going, and this is what we’re normally supporting. Which side are we going to be on?” This drove him to research the adequacy of a plant-based diet for athletes. “Is it possible to be fit on a vegan diet?” Perhaps the answer to his question could finally solve his moral dilemma. After listening to top medical doctors confirming that plant-based diets are adequate for athletes, he was left with no more excuses. “If I can survive and be perfectly fit on a vegan diet, how else can I justify continuing to eat animal products?”

Patrick eventually made the leap to a plant-based diet on January 1st 2015, starting off with processed foods and progressing to a whole food plant-based diet within two months, his diet now mostly based on the Daily Dozen checklist created by Dr Michael Greger. Although he was discouraged by many, his friends still encouraged him to share plant-based recipes online, and this became the catalyst for his transition to a new career as a vegan content creator.

He went on to discuss popular myths about vegans and protein, such as that plants have an incomplete amino acid profile, and that vegans need to combine proteins to ensure adequate intake. As a dash of humor, he continued to a slide showing a hospital ward with unoccupied beds and asked the audience to guess what type of hospital ward is being shown. Of course, this makes reference to the fact that protein deficiency is extremely rare. Indeed, vegans consume 70% more protein than they need, according to one study.

During his lecture, Patrick made reference to apps such as Dr Greger’s Daily Dozen and Cronometer and described them as useful tools for vegans to track and adjust the quality and amounts of nutrients they consume with each meal every day. Asked about supplements during the Q&A session, he underlined that whole foods are the primary source of protein and everything else, whereas supplements such as protein powder should be considered secondary, as they’re only useful to achieve specific nutrition goals, such as helping to reach a recommended daily allowance of protein for athletes with a high target intake.

Towards the end, Patrick also discussed the need to challenge the stereotype of masculinity being tied to the consumption of meat, a stereotype that’s especially heard in gym circles, commenting that “there’s nothing less masculine than paying someone to hurt an animal whom they wouldn’t hurt even if they had the option to do so.”