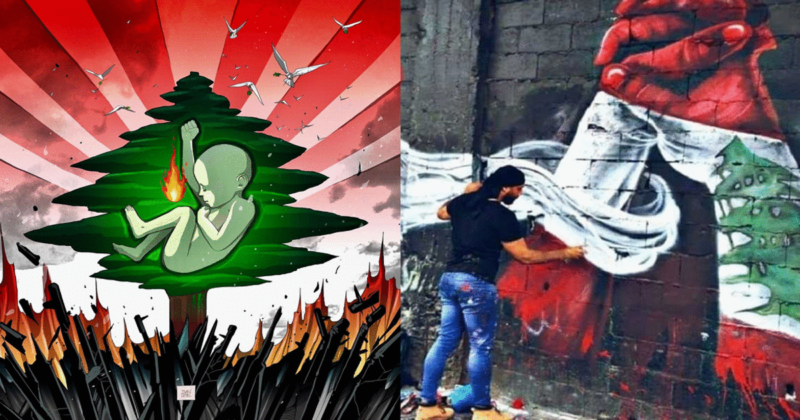 Each of us has our own biology, mind and unique history of experiences. It only makes sense that people may see things differently and form different conclusions about the Lebanon we want. Is it worth losing friends over different opinion or beliefs about what is right for our country?

Here’s what I’ve come to learn after sharing a post showing support (as many others do) to the Lebanese president Michel Aoun, where on the other hand, hundreds of thousands of protesters are raging against a corrupt ruling elite who had been duping the Lebanese people for decades.

Many people are full of resentments and anger. Anger just manifested itself in the worst way possible. They spread such negative comments in the most demeaning, condescending, and hateful language directed on me! It pains me to see and realize the low and degenerated level that some people have that show nothing but insecure ways of expression and low self esteem and hatefulness.
I Tried my best to have a good attitude in this tough situation. I couldn’t control their reactions but i managed to control mine.

Among all negative emotions, hate is probably the most infamous one. It is often seen as a purely destructive emotion that we would be better without. Although it does often do more bad than good, hate may in some cases be functional in making us avoid or banish certain people.

“All Good or All Bad”

“All Good or All Bad” is a distortion that is affecting the Lebanese people today. this distortion involves “splitting” the qualities of a person, a politician or a group of people to the extremes instead of recognizing the mixture of strengths and weaknesses that all people possess. People who “split” in this way also need to selectively filter information in order to maintain their illusion. This positive or negative distorts reality so that if their favorite politician or leader does something wrong, then it is minimized or dismissed as unimportant but the other politician’s faults are magnified and promoted.
The mistaken impression that our opinion or belief is superior to other people’s opinions or beliefs is the root of most of the conflict between the Lebanese people. It also leads to hostility between people and devaluing of other’s ideas that can harm or even end relationships.

we need to minimize these distortions and show a willingness to listen to views other than our own. In speaking with each other during these stressful times, we would ideally remain respectful and reasonable with each other. It may also help to recognize that people we disagree with and their supporters are not “demons” but simply view things differently and may actually have something important to offer.

Is it worth loosing friends?

We can make progress in melding differing opinions to create ideas that are more representative of our entire population instead of being polarized with a “winner takes all” mentality. If we are able to do this, we are in a better position to protect our relationships. Hopefully, a more civil tone and agreeable climate can develop so we can move forward without all of the emotional drama that’s being displayed these days.

Some people will not be open to exploring these differences. If that is the case, I decided to walk away from these people and still cherish relationships with people who will see the value in my friendship with them.…no matter how different their opinions or beliefs are.

The actual way to fight resentment and anger is not with more anger and hatred. It is with compassion and understanding. You cannot achieve peace by yelling. You achieve peace by choosing to be peaceful.

Feed hatred and it will grow. Confront…
August 9, 2020 No Comment