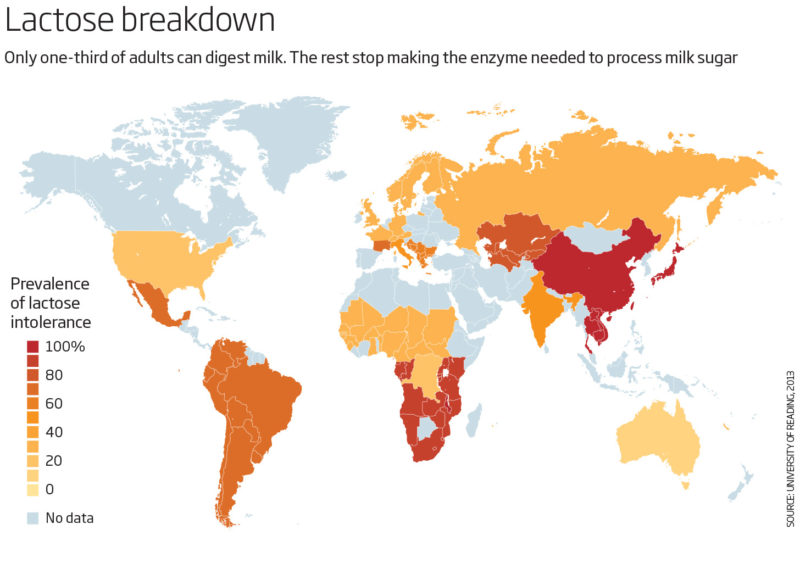 With over 75 percent of humans on the planet unable to properly process lactose (lactose intolerant), it is evidence enough that we are not doing what is natural and in accordance with our bodies.

The reduction of lactase activity after infancy is a genetically programmed event. Lactase is necessary for the digestion of lactose, the main carbohydrate in milk, and without it, milk consumption can lead to bloating, flatulence, cramps and nausea. Those who could not digest milk were once called “lactose intolerant”. They are now regarded as normal, while those adults who retain the enzymes allowing them to digest milk are called “lactase persistent.” The only reason these people produce lactase through adulthood is that some populations have mutations because humans have domesticated livestock that produce milk.

Commercial milk products are often depicted as the “solution” to lactose intolerance.

These products are enzymatically modified to prevent symptoms of lactose maldigestion. But even the lactase pills don’t solve the problem, as individuals can still experience digestive symptoms.
There is no reason for people with lactose intolerance to push themselves to drink milk. Indeed, cow’s milk does not offer any nutrients that cannot be found in a healthier form in other foods.

Dairy industries have got one thing in mind and that’s to sell as much of their products as possible to the consumers.

Inconsequential of the health problems associated with it, these health problems are severe. Surprisingly, milk-drinking does not even appear to prevent osteoporosis, its major selling point. Research shows that calcium losses are increased by the use of animal protein, salt, caffeine, and tobacco, and by physical inactivity. Animal protein leaches calcium from the bones, leading to its excretion in the urine.
However, calcium is readily available in sources other than dairy products. Green leafy vegetables such as broccoli, kale, and collards, are rich in a form of calcium whose absorption is as good or better than that of cow’s milk.

Dairy has now become a key and central battle and it is losing as the world goes plant-based.

A huge increase in milk alternative products like rice milk, almond milk and coconut milk are popping up in grocery stores and convenience stores everywhere.

We most certainly do not need dairy to live a healthy life as marketing campaigns try to convince us. The truth about milk is starting to come to light and many are opting for alternatives