Dolphinariums show us the image of a playing dolphin, gentle and quick to entertain us. But behind this façade hides a sad reality:
Captive dolphins are controlled by their food and suffer endlessly from the perils of captivity. The employees of dolphinariums pretend that the dolphins love taking pictures and constant human interaction, but these are wild animals and their purpose is not to entertain us, they have a right to their own freedom, just like we do.
Each pod of dolphins is different; they have different languages and a different culture. The new group in a marine entertainment park is foreign to a wild-caught dolphin, leaving them stressed, lonely, and confused.

These beautiful animals should not be in captivity and used for our entertainment. 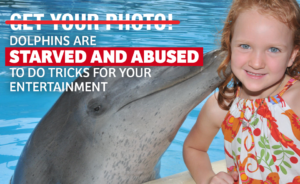 “Governments around the world are recognizing that dolphins, orcas, and other cetaceans do not belong in tanks. Chile, Costa Rica, and Croatia all have banned the keeping of cetaceans in captivity. In 2013, India’s Ministry of Environment & Forests banned the keeping of captive dolphins for public entertainment. Other countries, including Brazil, Luxembourg, Nicaragua, and Norway, have highly restrictive standards that make it nearly impossible to keep cetaceans in captivity. The last dolphinarium in the U.K. closed more than 20 years ago. Forcing such endangered, highly intelligent animals to perform and keep them in such conditions is unacceptable.” PEOPLE FOR THE ETHICAL TREATMENT OF ANIMALS – PETA

“What we think is the blissful face of a dolphin can obscure the animal’s true feeling, especially when we keep them confined. Let’s not forget that dolphins also die smiling!” writes Doctor Maddalena Bearzi, the President and Co-founder of the Ocean Conservation Society. They are being kept in tanks “for our entertainment; entertainment for the motive of making money, and lots of it.”

A few years back, Cirque du Liban confirmed in writing that the use of animals in circuses is unethical.

“We believe the use of animals in circuses is no longer ethically acceptable and do not use any animals in our work.” – Izak Abou-Sari, Founder and Director, Cirque Du Liban

However, it seems like Cirque Du Liban  is not looking forward to stop using animals in its shows.